Or Racism and Coronavirus: What Ails Indians, Americans, Blacks, Manipuris, and All Other Races?

Mongoloid faces becoming what many of the non-mongoloid stocks spit their anger and fear on is far more problematic than plain racism, which itself deserve one clean death punch into its face. Racism is SHALLOW, and what it takes root in supports other ailments, religion being one of them.

The “face” just happens to be easily seen and you can give vent to your boiling fear and anger and pour all that emotion into that face (the mongoloid face, in this case, while many other faces have already been subjected to this treatment in other cases) because you want to kill what you fear so much. When the Indians (who suffer racism in the UK and the USA) call people of the mongoloid stock (majorly people from the north-eastern region of the country) coronavirus with disgust and fear, it is not the face they hate or fear—it is the virus, but misinformation has “forcibly” associated the virus with the face, which works and consequently produces the effect of the face representing the virus. This is how symbolism is born.

Symbolism is a primitive, the most ancient mode of managing the unmanageable or construing the unconstruable, by capturing this extraordinary force by means of something concrete, something palpable. If it is concrete, it is definite, and by giving it a name, you think you have figured it out and it is in your control. This is the method of giving birth to gods (which were initially the representation of different extraordinary forces of nature) and hence of religions. Even traffic lights, the buttons for play, pause and stop, and so on. This is how icon/image worshipping was born—it works by the same principle as what we call racism works. The idea of national flags works by this same principle. Symbolism, in many ways, is stupid—it is for stupid people, because most people take the symbol for what it represents, which is problematic. That is why Lord Krishna in the Bhagabat Gita says representations are required because not everybody is wise, meaning that most people are stupid. Idol worshipping is the same is racism.

Humans are symbolic thinkers. In the right of our mind, symbolism serves as useful shorthand and helps us, saves us a lot of time and confusion. However, being symbolic thinkers throws us into havoc in two kinds situations: (i) when humans are incapable of distinguishing between the thing and the symbol of the thing (for example, if somebody pisses on the symbol of your idol or nation, you feel outraged and your blood boil to the extent of killing the pisser right there—think of idol worshipping, flag worshipping in India) and (ii) when some symbol is forcibly imposed on something when the two are not related at all, thereby arbitrary creating a link between the two unrelated categories, which is a nascent phase of symbol creation, and hence should not be ignored.

This is how the human psyche works. Symbolism and one or other form or forms its negative byproducts are rampant wherever humans are. It’s a universal human cultural product. It is not to say that racism is natural and hence we should feel OK about this. On the contrary, it is to say that there are natural things such as viruses and bacteria (for example, the coronavirus) that kill us. Racism is not less lethal in a different realm, and you know it is lethal only when you are at the receiving end. We know what racism has done to the black people, but we recently saw how some blacks (who are at the receiving end of White racism) becomes the wielder of this lethal weapon. Similarly, we are witnessing how people from the north-eastern region of the country are at the receiving end of racism at the hands of Indians (who, or rather whose relatives, are having a rough time at the hands of Whites in the UK and the USA, not to say any other white countries. If we look closely into the home countries or states or towns of the mongoloid faces, we will still see micro-racism of sorts, which is not less lethal.

If it is unsavory to you, probably it will be to others too. So don’t be cruel, even if you cannot be kind. You are under no obligation to be kind, but being cruel is expensive, not to you at the moment of your being cruel, but to all the rest, and to yourself also at a different point of time, because what you sow never goes in vain. It has results. You may not live long enough to suffer that consequence, but your children or grandchildren will suffer. So even if we may not be so good naturally, just think of the consequences and let’s cooperate to make a better world for ourselves and for our children. 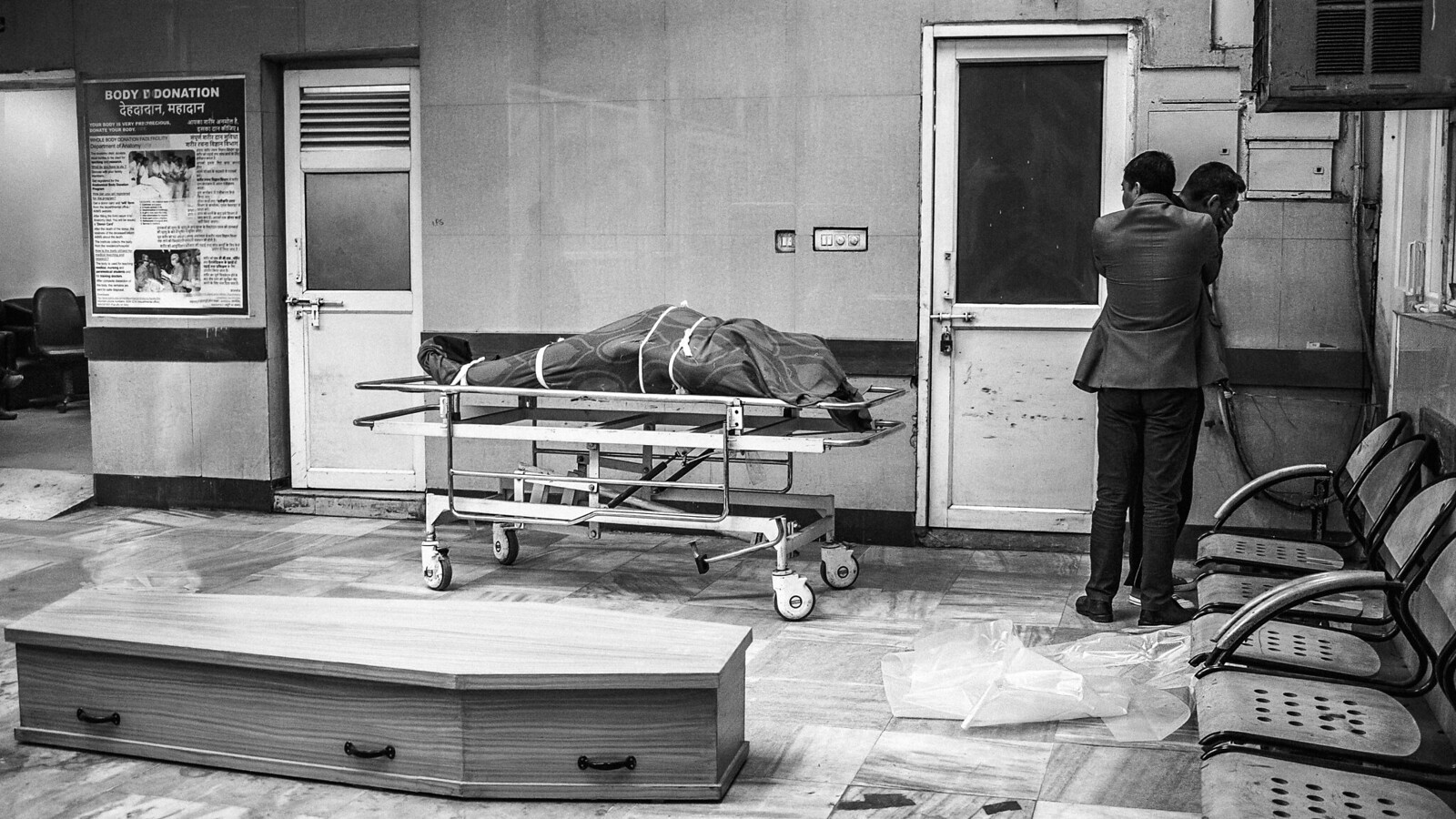 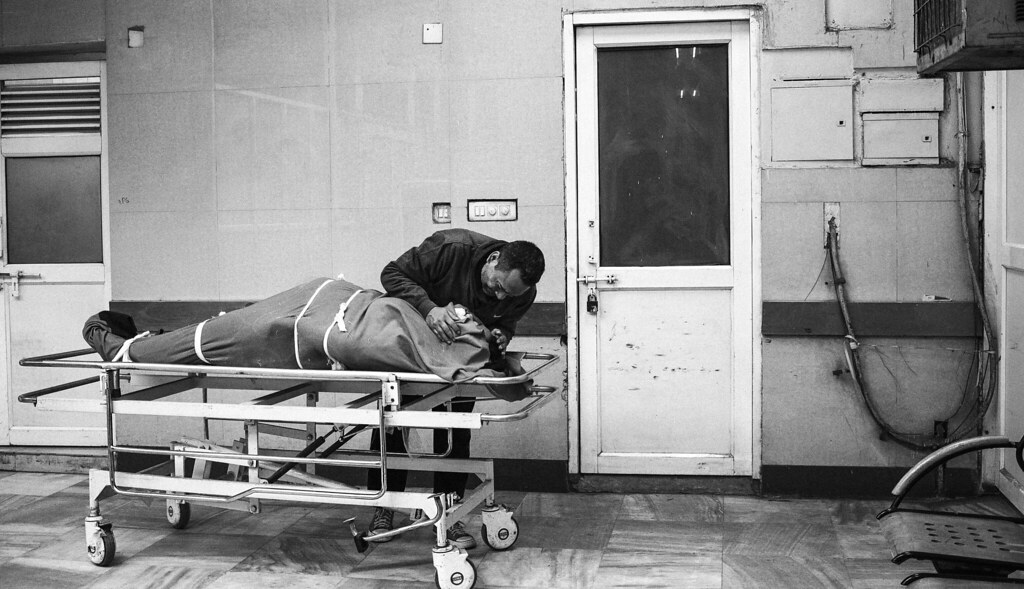 Kulajeet Pukhrambam giving his wife Akoijam Neelu (39) the last kiss on the forehead after she passed away on 22 January following a stroke on Saturday morning (18 January). Neelu was initially hospitalized at UK Nursing Home, Vikaspuri, New Delhi, which without even a CT Scan machine of its own wasted much more than the first few critical hours without giving her any treatment. She was moved on the night of 20 January to Jaipur Golden Hospita, Rohini, New Delhi, which said there was nothing to be done on her. Neelu remained on the ventilator until being moved to Safdarjung Hospital on the night of 21, where the last lingering faint pulse finally passed into total silence a few minutes after 4. Her body was embalmed at the AIIMS Embalming Centre on 22 January and taken home on an Indigo flight the following day. 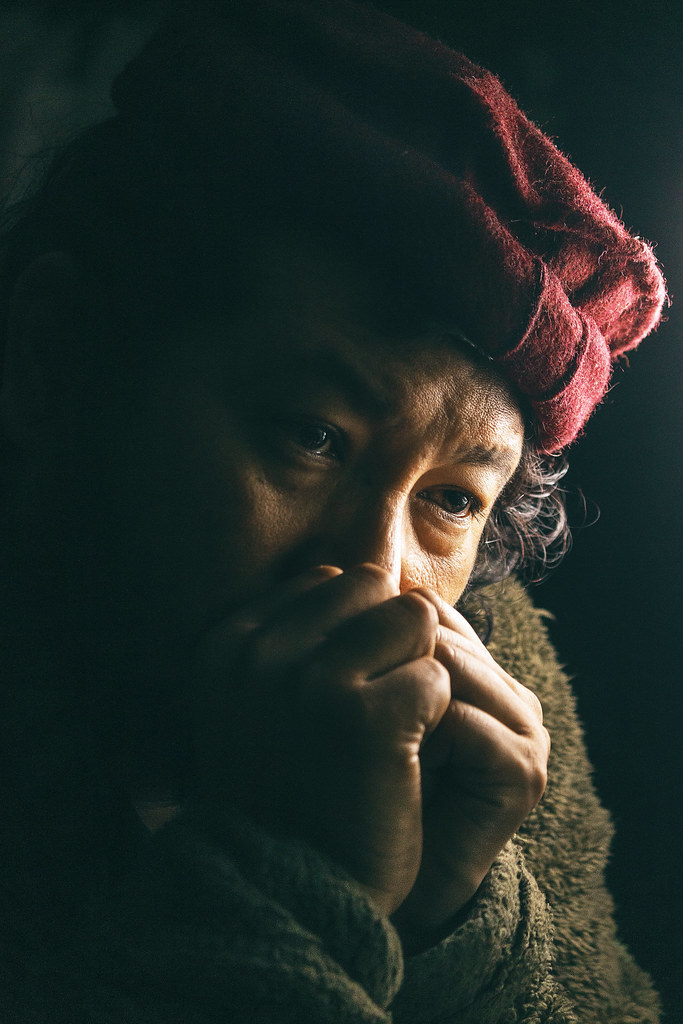 The rain paints the city on the windswept street
where leaves from forgotten places
desperately scoop up memories fading out into the past,
those memories I once tore off my hair to get rid of,
things that turn out what I am made of.
How far can you get away from life?
You just stretch it only like a bodycon.

From a distance, life is silent like an unread poem,
all its noise a frozen tale trapped in a magic ball.

The wind says nothing—it just blows the dust
off the dusty park bench I wake up on
to bring forgotten dust from other parts of the city.
You see there is a time in life that wombs you
so perfectly with nothing beyond it that
the keys on the piano repeat on the few same notes
and nothing crosses the landscape
to become a memory, and you—
a beautiful, sad painting in tawny sunset.

It all turns golden at sunset before it’s all dark.